I had a chance to walk on Offa’s dyke. About 800 AD (or CE if you’re a stickler), Offa, the king of Mercia built a wall along the border with Wales. Parts of it still survive.

It was rather dark under all that growth, so the picture isn’t quite as clear as ideal. It wasn’t really a fortification, but more of a definition of the boundary between the two kingdoms, and no the Welsh didn’t pay for it. You can see where the Mercians dug stone and earth from the English side to build it up – usually on the edge of a ridge where there wasn’t room to grab soil from the Welsh.

The trail follows the wall for about four kilometers. We came back through Beech’s farm (a good looking campsite) and down “Miss Graces’ lane.”

There’s a ‘goddess’ offering near the Devil’s pulpit (since Tintern Abbey is in ruins, I guess he’s winning).

The pulpit, itself, with the ruins visible in the haze below. The Devil was supposed to preach to the monks from here.

English Robbins have set up near here. There were at least to male birds, both begging and chirping loudly to each other. (Get off my lawn?).

Long-horned cattle that reminded me of Aurochs as they moved through the forest were in the woods near our car.

These, from a disused corner in Harlech castle in Wales show that they really did fling stones from Trebuchets.

The gateway to the castle.

The dogs here are friendly, at least I haven’t heard anything howling over the moors. The cows, on the other hand, now those you have to watch.

The picture, from the top of Hayter Tor shows a “tramway” from the old quarries. It doesn’t look like much, but it’s about 3km of carved stone rails. None of that simple and cheap wood stuff. Imagine the amount of labor that went into it.

Clearly it’s better than trying to push carts across muck, but surely there must have been an easier way.

One of the books I’m writing will have the heroine and the hero for that matter, working on breaking a difficult French cipher. I’ll have them work on something based on Jefferson’s disks 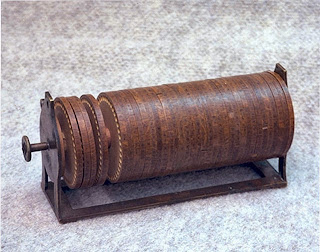 Given the technology of the day, this would have been very difficult to break, and even today if used correctly would give the NSA fits. (They’d still break it, but it could be made harder if it were used as a superenciphering step.)

That said, I’d like to set the record straight. According to “The Man Who Broke Napoleon’s Codes, the story of George Scovell” by Mark Urban, the French weren’t that sophisticated. They actually had in their “Le Grand Chiffre” a sophisticated two-part code of 1400 or more groups. It possessed redundancy for common phrases and a number of similar good features. It was certainly better than the “Playfair” ciphers the British would adopt in the 1830’s.

The trouble is the French clerks were lazy, and laziness, while a virtue in computer science, it is a disaster in security. They would only encipher parts of the message and the context would give Major Scovell all sorts of clues to what the rest of the message meant. Things like “after the battle at 872 last week general 8.5.6….” Needless to say, they would have been much better off either encrypting the whole thing or sending it just in plain.

Then that’s why I’m blogging in English and not Francais.

I was just cleaning up details from my last book and looked at the page for William 1st Earl of Craven. He should be distinguished from his father William the 6th Baron and his son William the 2nd Earl. I noticed something odd in his miniature, the eyes were too big.

He looks to have been a handsome enough man,though possibly painted as an “Idealized representation and not a true portrait of the idiosyncratic features of the individual” (S. Baldric). The artist used the same trick of making the eyes bigger to make him more appealing that is used for velvet paintings of cats, puppies and children. Not to mention Elvis.

Sometimes when I’m developing a story I need to invent various complications. If things all seem to be going perfectly for the heroine, then it’s a dull write. Worse still, it’s a dull read, and that’s what matters.

In my latest, I needed to research the “high life” of the ton. Sexual mores and all that sort of icky stuff. Nothing I’d put in a sweet romance, but the sort of thing the characters would know.

Somehow I stumbled on the 6th Baron of Craven, his wife Elizabeth, his son the 1st Earl of Craven and the scandalous memoirs of Harriette Wilson. It was the sort of lifestyle that made the ’60’s great (or so I’m told). I needed to make a few name changes, but the dates and the people matched the story I was working out.

Harriette Wilson’s memoir starts with:
“I shall not say why and how I became, at the age of fifteen, the mistress of the Earl of Craven.”

There’s not much I can add. (Except she didn’t understand why he liked Cocoa Trees, Boats or the Carribean.)

It’s a right bugger very difficult to get an accurate handle on relative prices between historical times and current day. Some of this due to the differences in the quality and quantity of goods available. No amount of money would have bought Jane Austen a laptop (Not that it would have improved her work).

You can, because I did, find very detailed work done by reputable historians to give relative wages and costs through 1700. Even then it’s hard to compare because the goods and services are so different.

One thing I did find while checking on coach times and costs was the price of a stage coach (the 8mph sort in 1810, that changed horses every hour) from Bristol to London. It was about 1.2.0 pounds (more or less I’m not pretending to be completely accurate here). Doesn’t sound like much but remember that the median income was about 30 pounds in a year.

This means, that relatively speaking it’s cheaper to fly across the US and back than it was to coach from Bristol to London. ($40,000 average US, $300-400 to get to LA). It’s even relatively cheaper, if you’re careful, to go from the US to the UK and back.

But then we’re spending a lot of “sunk capital” in the form of fossil fuel, which might not be properly priced.

One of the things I try very very very hard to get right when I write about the regency or other periods is the time and difficulty involved in travel. I find it disturbing when a character travels at modern rates in a period book. For example, in Georgette Heyer’s “False Colours”, one of the main characters travels from Vienna to London in far less than the weeks it would have taken at the time. Super-horses that would put a Jaguar to shame, let alone a Vauxhall Nova abound in regency romances.

This can be more than a little disorientating to a modern reader, at least one who hasn’t backpacked, canoed, or ridden any distance themselves. So here are some times and distances.

Messages could be sent in several ways, depending on when, where and how much you or your recipient was willing to pay. An express traveled as fast as a rider, and you had to pay a premium for that. Normal mail was slower, and traveled at coach speeds (a day or two from London to Bristol). During the Napoleonic wars both the British and the French had optical telegraphs. As long as they were visible (i.e. in the day and it wasn’t foggy or raining) then messages traveled at almost modern speeds. A French raid on the English coast could be reported and the troops dispatched to it in 20 minutes. Of course the troops could only move as fast as they could walk or ride. This was a war effort and was dismantled almost as soon as Napoleon left Paris for Elba.

All this mean that things took time. In one of the books I’m working on “The Mysterious Mr. Willis” a regiment is being organized in 1803 to be deployed in 1805. That may seem a long time, but the 2nd division of the 62nd foot was organized in 1803 in Devizes and deployed to the Channel Islands in 1805.